Posted by    Wine Wise    0 Comments
You have a lovely, vintage bottle of red. You’ve heard about decanting—and feel like this is the perfect time to try it out. Before you do, read on for the dos and don’ts of decanting.

You have a lovely, vintage bottle of red. You’ve heard about decanting—and feel like this is the perfect time to try it out. Before you do, read on for the dos and don’ts of decanting. 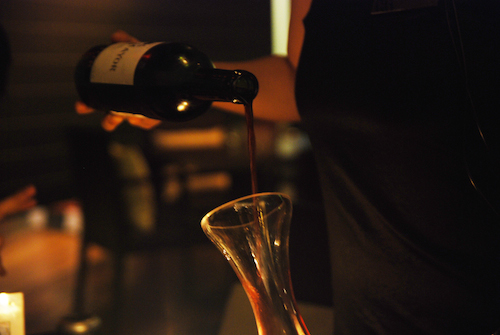 If you’ve been in an upper class restaurant, chances are you’ve seen the whole decanting ritual parody. The solemn waiter who lifts the wine bottle, holding a flickering candle flame beneath, as the wine gently trickles into the waiting decanter… There’s really no need to be so serious, here we show you what you need to do.

Decanting originated from the ancient practice of drawing wines from a barrel to be carried to the table in a pitcher. It evolved, of course, to when wines began to be aged in the bottle.

Back in the day, there was typically quite a bit of sediment in the bottle, and decanting was a practical means of separating the clear wine from the sediment.

Exposing a badly made wine to oxygen could also help ‘blow off’ unpleasant odours caused by things like bacterial growths, unwanted yeast cultures (brettanomyces) and sulphides.

These days though, sediment and bad winemaking shouldn’t be a problem, so without further ado…

The Rules (kind of)

All young wines may benefit from decanting, and certainly won’t taste worse.

Actually, rather keep a very aged wine in the bottle—you risk aerating the delicate aromas right off.

Don’t decant days ahead—you’ll turn your wine to vinegar, a simple ten to 15 minutes should do the trick

You will rarely, if ever, use a decanter for separating sediment

They come in handy for blind tastings—or at home if you want to disguise that you’ve used a slightly less expensive label.